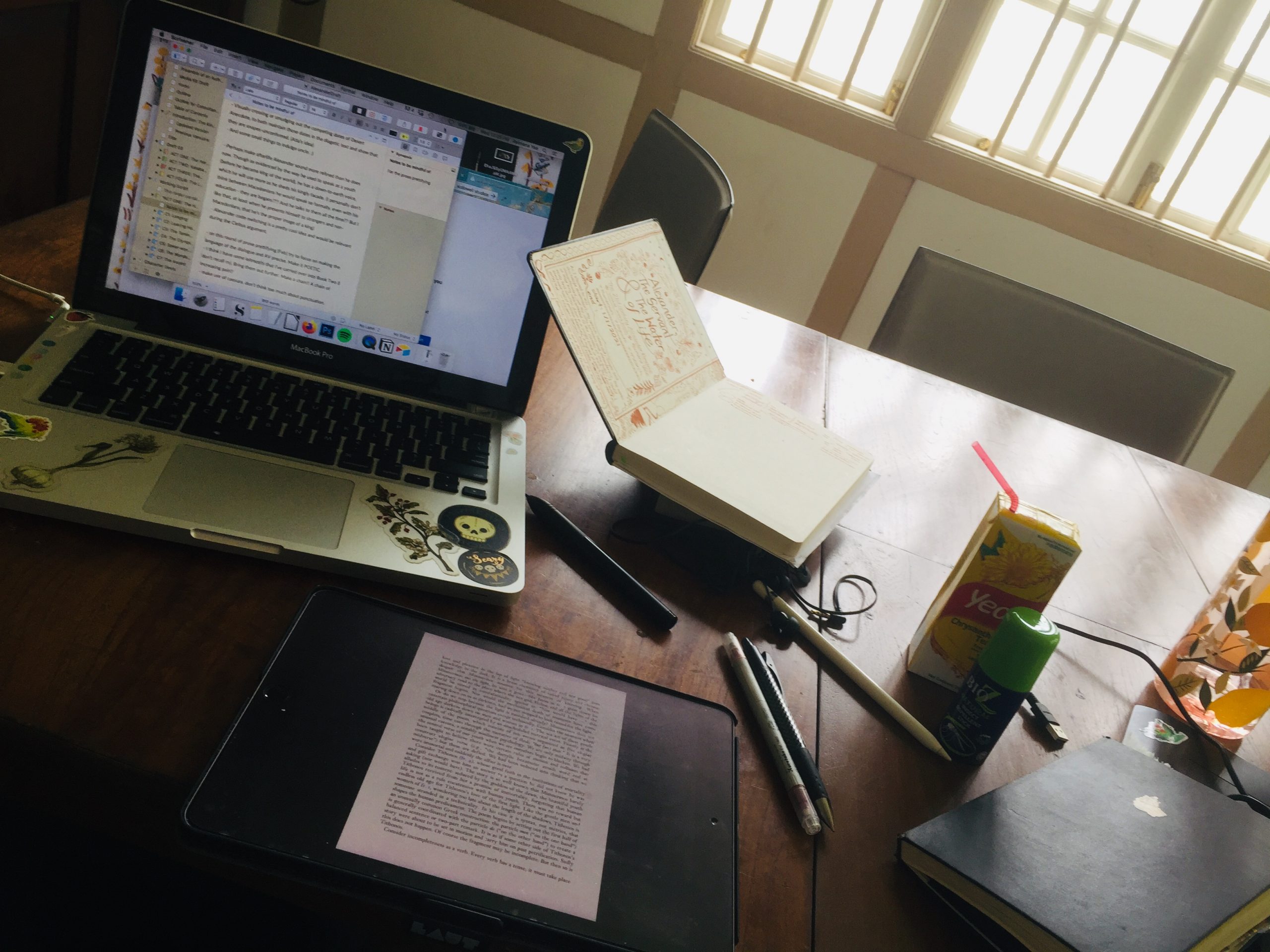 Last weekend I received feedback from my editor, A, finally completing the second of a two part alpha reading stage- allowing me now the comfort to feel I’ve reached far along enough that I can start talking about the thing. The writing thing.

I wasn’t sure how to document the Writing Stage of Alexander Comic (or my graphic novels in general). It’s not as instant, fast or natural as the rest of the graphic novel making process, when it’s just me reading or sketching or drawing, and I can just post a screenshot/photo accompanied with a quip. You can’t really show much with writing; only the end result. Additionally, I have this superstitious belief that the period of making a story come to life should be treated as sacred, private, personal. Talking too much about the writing while you’re supposed to be doing the work is an invitation for a jinx, or at least… it invites said jinx to me.

(Note: my family has a curse of jinxing events if we talk about them publicly before they actually occur. Many a holiday, dinner plan and party have been killed. Hey, even my rainforest residency getting postponed twice (always coinciding with a lockdown) was an example in action.)

Speaking of which, I’m already here now – in the middle of the rainforest, finally. And that’s because, this time I DID NOT SAY anything publicly. Hah! Third time’s a charm, if I keep my internet mouth shut.

Now that I’m already a week into doing my actual Digital Island Residency and a year into writing Alexander, I’m free to talk about both. Jinx-free!

Right now I’m ‘prose prettifying’. It’s not really a serious or necessary thing. It’s just something I do because I want to and I like the challenge of prettifying what words are necessarily available to the reader (dialogue and captions) within the primarily visual space of comics.

When prose writers come to comics for the first time they tend to make the mistake of focusing on long, luxurious sentences, putting their eloquence on show. And I think it’s a tempting sin even exclusively comics writers fall into. It doesn’t help that the comics industry still has a bias towards writing as craft (it is; I’m not saying it isn’t), as THE craft.

(Can’t relate lol. If I can make entire scenes silent, I will always. I don’t even like putting in sound effects.)

But I’m trying this thing where I am approaching it like poetry, which values economy of words and precision of feeling/meaning/impact/imagery. A different brand of eloquence. There’s this idea I have that comics writing is more akin to poetry than prose, since speech bubbles are already evoking actual speech (pauses, tone, emphasis, etc), and when bubbles are separated, the separation acts as caesura or enjambment. What if I take this idea as far as I can?

Obviously it won’t be true poetry because of comics’ hybrid form. But it’s a good experiment to play with. And if there’s anything constant about my craft since TWIDI, it’s experimenting.

Comics writers don’t have one process they follow. Even then, it changes between scripts, fitting the needs of that particular story. So when I talk about how I write, it’s in very loose and open terms (keeping in mind the Onion principles).

With TWIDI (always, forever) and The Carpet Merchant (before I got my editor, A), my scripts are a mess. Barely any formatting except in the separation of lines and basic punctuation. Not even a dialogue indicator (though I feel that helps in making the speaker’s voice distinctive by force, since I have to identify who is speaking by the way the lines sound). Lots of personal notes interjected between story.

With Seance Tea Party, My Aunt is a Monster, and Alexander Comic, the scripts are more presentable. Structured. And that’s only because other people will be reading it. They can’t see my chaos. It’s embarrassing.

Since I’m an author-illustrator, or rather, since I’m the artist who’ll be drawing my scripts, I don’t put in visual direction. I only do the visualising after the script is mostly completed (barring edits, minor revisions and minor unsolved details), at the thumbnails stage.

Thumbnails are like, half or three fourths of my writing process, as it’s where I replace most text into images, which means a LOT of editing/revision happens here. Cutting of text, addition of moments for impact, placement of dialogue. Not to mention the actual visual direction. It’s the most creatively intensive stage in my entire graphic novel pipeline. Afterall, this is where a script starts becoming a COMIC.

(Which is why I prefer to work from a solid script before I am confident enough to do thumbnails. As my pacing is so dependent on double spreads and page turns, any major changes to story will destroy a few of the layouts I’ve prepared, especially the unique ones, since I don’t just use grids and box panels!)

After this I proceed to art research as I flesh out the scribblings, but that’s a process for another blog post, when it happens. 🙂

Alexander’s a big work that I had to split the writing into four volumes. I mean, it’s always been four. Just that I initially wanted to script all volumes in their entirety and present them as a singular piece for consultant/editorial review. Obviously hubris caught up with me.

Eichhh it’s so strange though, working on this. It’s really unlike anything I have done, though it is a natural progression from The Carpet Merchant, a logical extension of my repertoire.

I’ve talked about this being a ‘calling’ before — don’t remember the blog post now — and maybe I’ll elaborate when I’m not embarrassed at it sounding a bit cuckoo. Just know it’s the kind of work that demands quite a lot of introspection and growth from me, a lot of creative faith. While I’m not afraid, it’s challenging.

It’s also colliding with my growing tiredness of corporate media (nothing wrong with that) turning the art they produce into performative, brand-associating mush (some things wrong with that).

I really miss seeing more strange, characteristic, visually indulgent art. The kind of thing that creates the afterlife wonder of What Dreams May Come and the cinematographic brilliance of The Fall. There’s a lack of that in the current era. Maybe because of monopolistic urges, Idk.

Not sure what is the solution. I don’t think I am looking for one anyway. I am just one person doing their thing. I don’t want the weight of the world entirely on my back. I’m not made for that. If anything I wish the weight was distributed equally and the table was wider and artificial scarcity wasn’t a tool of oppression internally and externally, but well. We live in the 21st century. Nothing is simple.

I’ve been rebelling against this tiredness by intentionally moving inwards in regards to the things I read and watch. Recommendations from trusted people. Adding books to my mental list if they come up in context of certain conversations (usually on the accessibility of academia and the alternative modes of storytelling). Very rarely do I jump on the latest thing that’s popular on Twitter, not because of snobbery, just that I’m the type of person who engages in things when the buzz for it dissipates.

Here are the things I’ve been enjoying lately:

And the things in my queue:

Telling About Society, by Howard Becker (I’m thinking of getting the other two books in his series if I like this one); Craft in the Real World, by Matthew Salesses; She Tries Her Tongue, Her Silence Softly Breaks, by M Nourbese Philip

It’s healing to be engaging in these. I can’t explain it. But I do feel myself transforming slowly. Maybe it’s age. Maybe it’s cynicism. Maybe I am just finding joy in embracing the work that’s in my river of interests, that aligns with the person I’ve always imagined myself to become. A boring person mayhaps, but more honest.

I’m glad I have this time in the rainforest residency to waddle in the river.