Ask Me Anything: Creating One-Off Illustrations Based on A Comic/Graphic Novel 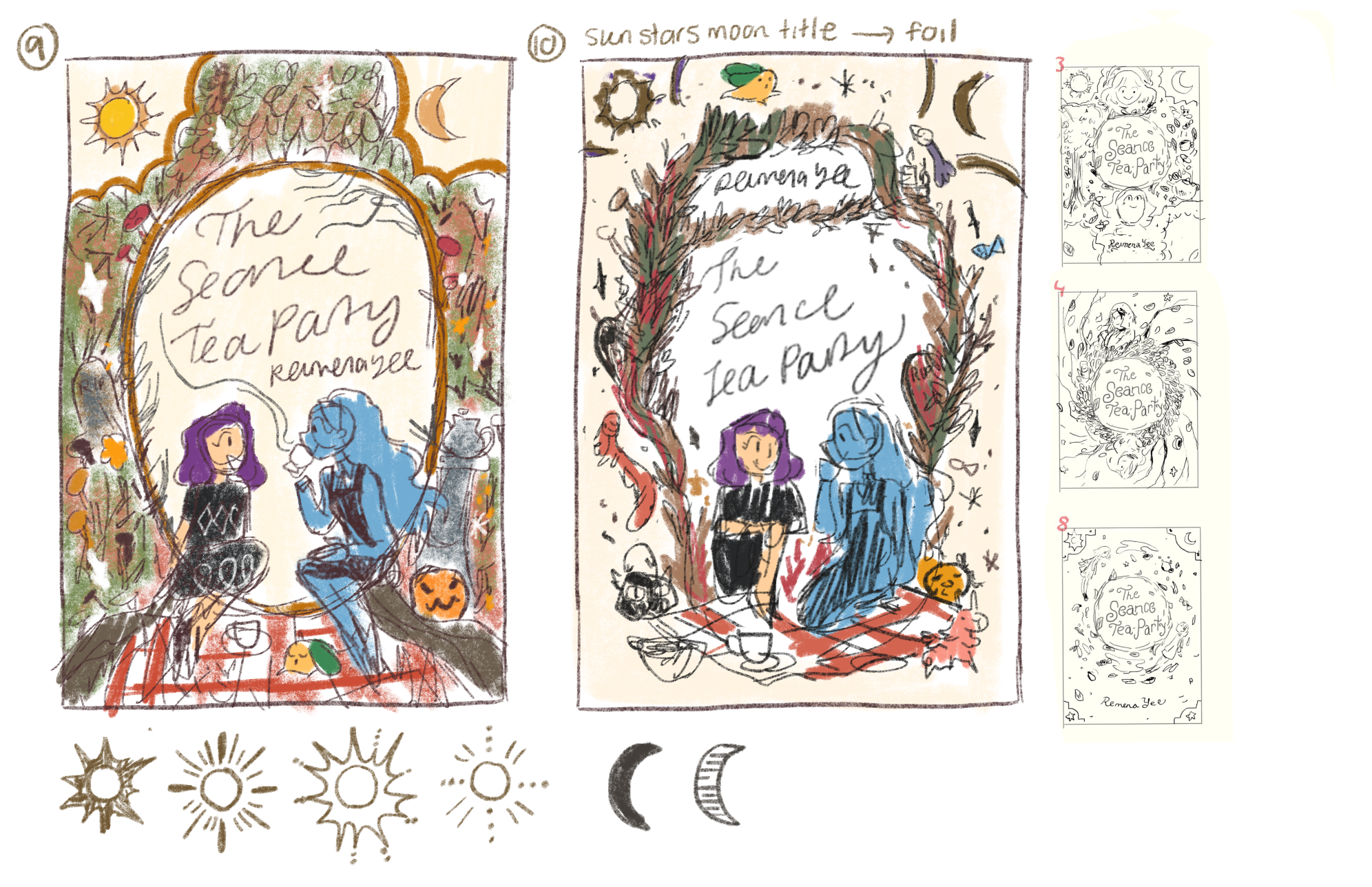 A month ago I opened up suggestions for topics to discuss on my blog. Thanks to friends and fans, I’ve quite a treasure-trove of ideas for future posts. (I’m still taking in more ideas btw)

I’d love to hear about how you create illustrations that convey so much with just one standalone image! Your covers and promo images are always so good and I’m specifically interested in the part where you get from “make X type of illo” to actual execution, if that makes sense?

Here’s a really good one from Sarah. She elaborated on her question a little further down the thread.

Hmmm I’m not sure! Maybe comics-related? I struggle with illo composition because my brain is too squarely in sequential mode all the time and I want to improve at stuff like covers and pinups/posters etc

This is very interesting to me because personally, I am the opposite – I started out comics as an illustrator. It took me… 5 years to understand the difference between sequential and illustrative art (the temptation to make every panel a standalone stunner is bad and powerful). Even today, there are marks of that illustrative quality, though they are thankfully mostly focused in the overall layout than individual panels.

Anyway, this means I find illustrating a standalone image, whether a cover or promotional art, easier and more fun than doing sequentials. It challenges my brain in a way that’s familiar and homey. Plus, it satisfies the instant-gratification monkey inside me better – comics take forever, an illustration is there and done.

I’m going to try my best to explain my process creating a standalone image that best represents the themes, emotions and “vibe” of my comics.

I usually have a really solid idea about what my comics are about. The genres, themes, characters, worldbuilding, emotions, etc.

All of those things? They are your materials from which you build your illustrations from. These materials are what I collectively call ‘motifs’.

The goal when creating a good standalone illustration is the ideal and successful, clear and impactful, expression of these motifs. Though a cover and promo art each serve different purposes, what you want the illustration to do is tell your readers ‘this is what my comic is about, this is what it looks like – if you want more, read my stuff’. Basically, you want to give them enough information to be intrigued.

But a standalone illustration is more than just promotion. Sometimes you want to draw something fun simply to tell a story, to scratch that itch (webcomic artists will understand the long wait before we get to the good part). I do this a lot. I draw random things based on my characters’ motifs. If they so happen to invite other people into my world, then that’s cool beans. Still, the point is to tell a story.

Here are some examples based on my comics.

The World in Deeper Inspection

The World in Deeper Inspection is a Victorian-era urban gothic fantasy. It has an eclectic cast: a Jersey Devil detective, a Norse Giant, a vampire, a banshee and a wandering immortal. Each of them has their own motifs, but I am going to focus on the main character, Detective Alcott Grimsley.

Grimsley has a few motifs attached to him that organically come out of his story. Warning: lots of old art.

He works at night: stars, moon, the different hues of the night sky.

He works with Night: in the world of TWIDI, Night is an all-encompassing parallel universe of ghosts, monsters, fairies, the things lurking at the corner of our eye. If he’s not alone, I often surround him with these creatures and bits of the worldbuilding. Usually, he’s accompanied by wolves (werewolves, Barghest, normal wolves) – because the first story in TWIDI has him interacting with a pack of werewolves. I keep that motif because I keep finding new ways to play with it.

He studies the esoteric: this is deep-lore TWIDI, but Grimsley is interested in the history of Night (he sees the world in deeper inspection, hah). The deep lore incorporates a lot of esoteric themes, like ‘As above, so below’, triangles, the eye of God, etc. Having him interested in the esoteric means I can borrow from a library of pre-existing imagery.

It also helps that Grimlsey has an iconic design.

Just from knowing what Grimsley’s aesthetic is all about, I can exploit his motifs endlessly. They all relate to his story and the larger universe of TWIDI in some way.

As I said before, each character in TWIDI has their own motifs. Bronx the Norse Giant is cats, winter, time (hourglass and clocks). Catherine the Banshee is flowers, the interplay between life and death, memento mori, pastels. Ilias the Wanderer is books and writing, the ocean, peacocks, solitude. Zeynel is floral patterns, carpets, roses, ravens and bats.

The Carpet Merchant of Konstantiniyya

TWIDI is mostly a collection of random, for-fun images for myself. TCM is more purposeful – most of the illustrations I’ve drawn for the comic were promotional. For other people to look and think ‘oh this drawing looks interesting; there’s a comic? Okay (clicks link or buys book)’.

TCM is historical fiction, about a carpet merchant, Zeynel, who suddenly becomes a vampire, and Ayse, the fire-of-a-woman who happens to be his wife. It’s also set in Ottoman Istanbul and makes a big deal about making carpets and the Turkish book arts part of its visual storytelling.

So what this means is that I have two protagonists, each with their own motifs, and the world of TCM, which borrows motifs from the protagonists’ life stories and the pre-existing library of Ottoman art.

The long tapestry above is basically, everything about the comic. Starting from the left, there’s

There’s a hundred ways I can exploit this motif, but anyway. All of this informed how I approached the cover for the printed version of TCM Vol I.

The nightingale and bat; the back cover design inspired by illumination for the Quran AND incorporated Ushak carpet motifs (the medallion, plus little things like fetters and the scorpion and such); the firework stars; the florals inspired by Ottoman metallic thread embroidery; and of course, Zeynel and Ayse’s relationship and individual motifs (Zeynel with his book, Ayse with her wool). This cover doesn’t tell the story like the tapestry, but it’s got the essentials down, and it’s pretty too. :p

I’ve only ever done two illustrations for Seance (the cover and the poster). BUT I can talk about the process of how I ended up with the final cover, since I’ve documented it pretty well. (unlike the other two comics, lol)

I did the sketches for Seance’s cover before I started the comic. Here is my original moodboard for it:

So I’ve got some ideas of what I want for the cover. The general vibe is “witchy and fun”, has an “ouija board element on the front and back”, and features the two main girls prominently. In the sketches, there are other motifs: tea cups, a tea party, graveyards and ivy, moon and stars (ouija-style). I also wanted a cover that looks illustrative, fairy-tale, whimsical, with a spooky element.

After some conversation with my designer, Patrick Crotty, and some thumbnails from him (you can see his take on the right column of the first picture), I made another set of sketches. Again, the original motifs are strong in these sketches. I also added a new motif, which came after I finished the comic: the little fairy animals that follow Lora around. Oh, and I wanted gold foil.

We ended up going for the white sketch, the one with a circular frame. Patrick had this idea of designing the cover based on a Japanese book of objects: the cover was of many tiny objects arranged into a dense circle around the title, with interspercing gold foil sparkles. I was totally on board with that idea, since it belongs to the same whimsical style as the Rifle Paper Co covers from the moodboard.

I don’t remember who told me this (either Patrick or my editor Whitney), but they suggested incorporating other characters into the frame (eg, Lora’s friends drifting away).

So I went off to do my sketch and this came out.

And after some minor tweaks, and the blessing of Patrick’s amazing title treatment, this is the final cover! It may not have the graveyard motif, but the vibe is right! It’s an illustrative, whimsical cover with subtle ouija-board elements.

(I’m leaving the back cover as a secret until publication)

Anyway I hope this post gives an idea of how I make a standalone illustration for my comic/graphic novels. It’s not theoretical and doesn’t give any concrete solutions for anything. (it’s more an art than a science, haha)

I guess my advice would be:

and exploit those motifs like mad. Draw a lot of thumbnails. Use different approaches for the same motifs. Look at other covers/illustrations in the same genre of work. Steal like an artist.

Sooner or later, you will find an image you like, that you feel represents the vibe of your story, that you know you’re hype to draw.

That is what a good illustration is.