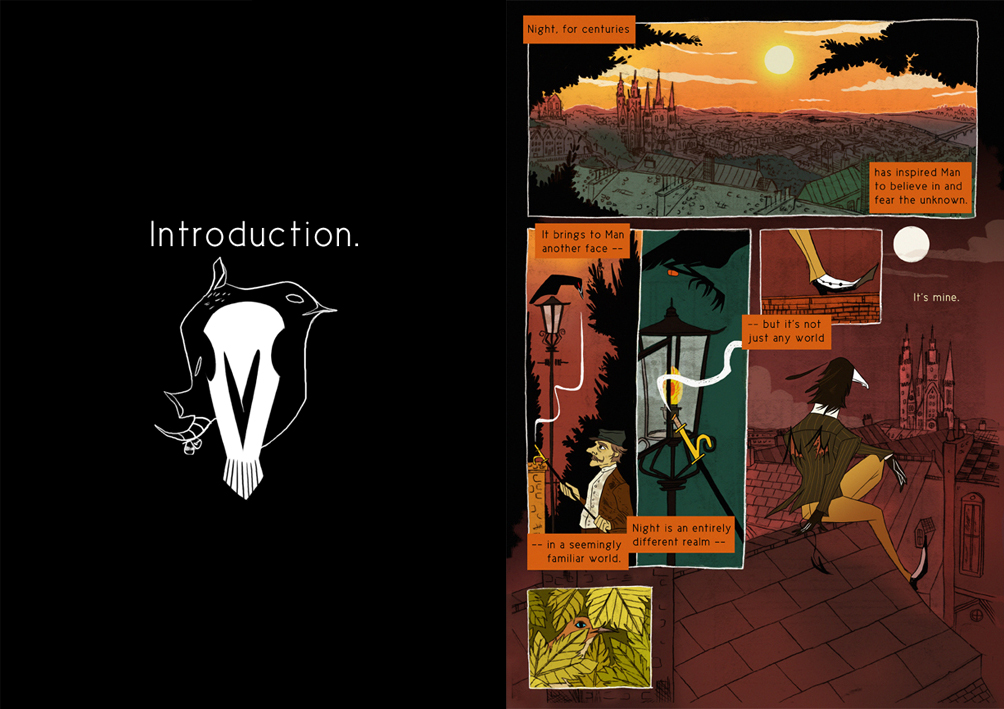 On March 31st, 2013, I published the first ever page of my webcomic, officially debuting The World in Deeper Inspection.

I was 18 then: fresh out of SPM, and at the start of my gap half-year. While my friends and schoolmates almost immediately transitioned into Pre-U Lyfe (A-Levels, IB, STPM, ADP – wow those names sound so irrelevant now) I was adamant about getting a few months off – not to travel since I didn’t have the money then lol, but to work on my passion project: an artsy, ambitious magnum-opus webcomic about a Jersey Devil detective and his friends.

TWIDI was born 3 years prior, in 2010, in one of those Typical Original Ideas Circumstances: when I was looking out of the schoolbus, wondering about the strange beasts of legend in the night. I thought about an otherworld, managed by a bureaucratic Ministry of Dangerous Anomaly, with a bazaar selling trinkets like fried fairies and bone-ash tea. At the centre of it was my Jersey Devil boy, Grimsley, who would solve the crimes and answer questions of the recently dead.

In the last 10 years, Grimsley’s solved a few strange cases (two-faced zombie uncle with a grudge against his nephew; a ghost lady with a missing head, a dullahan whose head got stolen by bird fairies) and picked up a few friends (a Jotunn secretary/bodyguard, a joy-filled banshee, a friendly neighbourhood vampire, a no-nonsense owl Jersey Devil, and a wandering artist with a past).

But this is also why TWIDI is so important to me. It’s stuck through me past PMR, SPM, A-Levels, and my 3-year BSc. It survived the move between two countries. It saw through 4 different eras of my life up to today. And miraculously, I still don’t find the comic cringey, despite being entirely the brainchild of my amateur 15 year old teen self. The core of the plot hasn’t changed. All of the main characters are essentially the same, albeit they benefit now with better self-editorial and maturity. It grew alongside me, my career and my personhood.

It was also at the centre of an existential crisis since I was 13 – do I pursue my calling as a storyteller, or do I choose a practical career path? I picked the latter because I knew it was best for me and my art (can’t do art without job/financial security), so I learned to be the Science Stream student. With the idea that I’ll eventually earn a degree which will lead to a decent-paying job in the sciences that will support my artsy stories. Very practical, very Malaysian Chinese; heck, if you ask me, even I would recommend this path to a budding artist in this country. But back then, I didn’t quite believe in this path for myself, and over the years I gradually lost my faith in it, until it became a quarter-life crisis from late 2016 – 2018.

There was absolutely nothing wrong with that path. What was wrong was the motivation. The reason why I chose that path was because I wanted to tell stories and serve people. All my science dream jobs were that: science communicator, faith traditions psychology scholar, astrophysicist, etc. I also wanted their knowledge to complement my other storytelling – the artsy, non-practical, non-Malaysian Chinese one. With words and pictures and panels. The kind of storytelling I was naturally doing and successful at. My calling.

At the end of the crisis, I came out with my old life and old future in the dustbin, but with TWIDI intact, completely confident that being an artist is my natural state of being. It helped that during the crisis, I was at the stage in TWIDI where I had to talk about one of Grimsley’s friends, the friendly neighbourhood vampire. Thus came The Carpet Merchant of Konstantiniyya, and all of its life-healing gifts that made me the full-time graphic novelist I am now.

It’s been 10 years since that 15 year old in the school bus. I hope I find the time again (and the endless stream of passive income) to return to TWIDI and my five spooky children. Their story isn’t finished, and I am excited to continue growing along with them.