Growing Up With Your Own Stories AKA I’m being sentimental

In the last 7 years since launching my side-hobby-then-career into storytelling, I’ve changed a lot. As I approach my mid-twenties, now is a good time for me to step back from the fast-paced rat race attention economy, to consider what I’ve learned, and how I want to move on towards a more thoughtful, more amazing thirties.

This post is partly caused by what happened a week ago. Basically, I was doing the internet version of spring cleaning my room, and found the dust-covered box under the bed. Inside the box were the blogs I made throughout my teenage years – including the blog that documented the development of my first and only webcomic since its inception.

Going through those blogs, I came upon a few interesting things. I saw how young I was, faffling my baby ideas about craft. How do I write a story? How do I draw it? What is the art direction, the philosophy, the goal, of my webcomic? Peripheral to that faffling was my grappling with who I was as a person. It was so strange to read how my younger self was foreshadowing the events to come (self-fulfilling prophecy???), yet stuck on the now-outdated views on the kind of adult I had to grow up into. I was seeing Teenage Me through the eyes of the adult she had wished to become, but never believed was a future for her.

If you’ve ever owned a diary you’d know what I felt. Hindsight is a trip.

The biggest difference I noticed between now and then (besides the surprising career change that was actually unsurprising), was how much time I had. To just think about things. To faffle and grapple and be imperfect. Other than my own self-imposed pressures, I had no external, ambient forces acting on my development as a creator-slash-individual. I had space.

I’m not sure if that kind of exercise is possible in today’s online climate. For a young person, a baby creator, to have the privilege of being irrelevant. The privilege of time.

7 years ago my webcomic stopped existing as a concept a developmental blog, and became an actual webcomic. You know that advice webcomics creators give out, the one that says ‘don’t make your magnum opus/epic/giant madcap story the first webcomic you do’? Hahaha, guess what I did.

(imo that advice is true, but only as point to consider. be aware of the madness you’re getting yourself into.)

7 years constitute a very brief period of time. (though if you’re 20 something it’s 1/3 of your life) But it was a brief period of so much change. I was growing up making stories, and my stories grew up with me.

Okay, I’m done with my preamble. Whoo! Who knew I could go on and on? (nah kidding; if I ever tweet I use up all the characters, but those big tweets are nothing compared to their platonic ideal… in the form of the good ol’ blog post)

Look, I miss having a blog. I don’t know. I miss having nuance? I’m 24 but god knows I feel 80 years old fast-consuming bite-sized content. Since the 2010s began, the internet walls that were once concrete became glass and slowly melted into cling film. Through the breakdown I forgot what it means to like, actually know someone? To actually know myself?

Don’t get me wrong. I’m grateful for increased accessibility, because it means I get to listen to voices I never hear before.

This post is also partly a reaction. I want to slow down. I feel like so many creators have forgotten to slow down, in favour of chasing clout. We put out those 240 characters in an attempt to make cymbal-clacking zingers. Hot take! Hot advice! Digestible content! But do those zingers give space for us and our audience to consider their own thoughts and opinions about craft? NO!! Those 240 characters ain’t enough!! And the corporate-owned monkey of internet algorithms is watching. Get those cymbals clacking. Clack clack clack!

Stop it! I want a waltz!

So the whole point of this post is to talk about how I’ve grown up as a storyteller right? Hm yeah, it is. It’s going to be brief compared to the preambles, because all this talking is meant to pave the way for the kind of work I want to evolve into. This post is for future me to look back on. It’s for future readers of this blog to see too.

When I started The World in Deeper Inspection, I was a baby creator. I was 18. Back then, my thoughts on storytelling craft was basic. The seeds were there though: character-driven, ambitious and artsy-fartsy. Great. Still basic.

Until I was 21 I didn’t really work on shaping those seeds. Just slowly watering them in my spare time. Because of studying for A-Levels (international post-secondary pre-university exams), then moving to another country, then having to adjust to my first year in B.Sc while being a foreign student and an independent adult.

Then The Carpet Merchant happened.

I’ve said it before: the genesis of TCM was incidental. Being at the tail end of 20 Years Old I never would have thought that a substory of TWIDI would end up more than that.

Oh how little I knew.

TWIDI as a whole grew up with me. It is a souvenir from my teenage years that has somehow survived into my adulthood. But I truly think the turning point that cannonballed my maturity as a young adult and artist is TCM.

Now looking from the other side, I can see the bits of immaturity that informed it. The insecurity I felt as a newly-minted teenager-turned-adult. Those nervous hands were drawing these pages. And why shouldn’t those hands be nervous? TCM was a 21 year old’s first full-length graphic novel. Unedited! Unmonitored! Yikes!

But I wouldn’t have changed it for anything.

People talk about looking back on their old works and feeling negative emotions (shame, disgust, embarrassment, etc) because of the imperfections they now see.

There was a tweet or a tumblr post, I don’t remember, responding to (hypothetical) older people who ask ‘why do you want this tattoo on your body? what if you grow up and regret it?’. The response was something like this:

I’m getting this tattoo on my body because right now this tattoo is what I want. When I’m older, I may come to feel embarrassed over it.  If I want to keep it, or change it, that’s a decision for future me. The fact remains that this tattoo represented something I considered important at that time of my life.

That’s personally how I see old stuff. They represented who I was at that particular period of my life.

The entirety of TCM was a very 21-23 years old me story that I don’t think 24 year old me would approach similarly. But 24 year old me would never exist without TCM. It built the artist and writer and person I am today. And I cannot be angry or ashamed or disgusted of it for doing that.

It taught me to be bold and to love something so deeply you want to do it justice.

This, I think, is the most valuable lesson of my early twenties.

When I finished the thumbnails of the second and last volume of TCM I made this FB status: 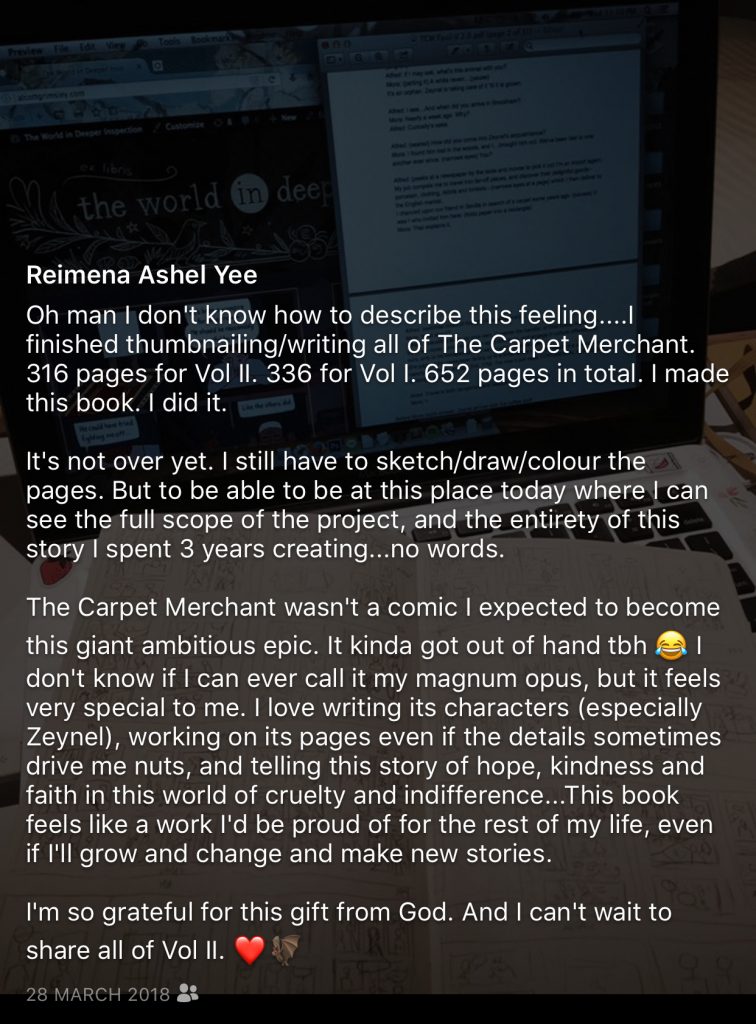 It still is true. Especially what I said about it being something I’ll be proud of for the rest of my life, even if I grow and change and write new stories.

Having written a couple of new stories (and pitching another) since then, I’ve been using the lessons TCM taught me about craft and storytelling. Here they are, in no particular order:

So, at this stage in my life, these ideas are pretty solid. There are certain ways I’d like to push these ideas though, to punk them up even further.

Project numero uno for this blog is to become the online island to quietly introspect my place as an artist, in anticipation for the next stage. It is a stable space unblemished by the demands of being relevant. Absolutely no quick zinger twitter threads. Nuance and long reads here only.

Digging around, I’ve found that several formalised theories on craft that contextualise my own process. While I don’t necessarily follow all of these theories to a T, I think it’s valuable to know their names, and what they are.

Anyway, if you (the reader) have made it this far. Congrats! Thanks so much for reading my attempts at regaining my voice aka my rambles.

One of the things I noticed while going through my old blogs was how much of my personal voice I’ve lost. It’s kinda been sandblasted to fit the micro-blogging and the demands of being visible on social media. Which I understand, because I also took part (and still am taking part) in fast media consumption. There are new bad habits chocolate-chip scattered within my cookie dough brain.

Project numero duo of this blog is to consciously move away from that part of modern culture and do… I don’t know? Slow-living but for the internet? I don’t intend to be an Influencer about it haha. It’s just me being Millennial Tired and Millennial Old. Zzz leave me in peace.

I’m excited to deep dive though. We’ll see how it goes.