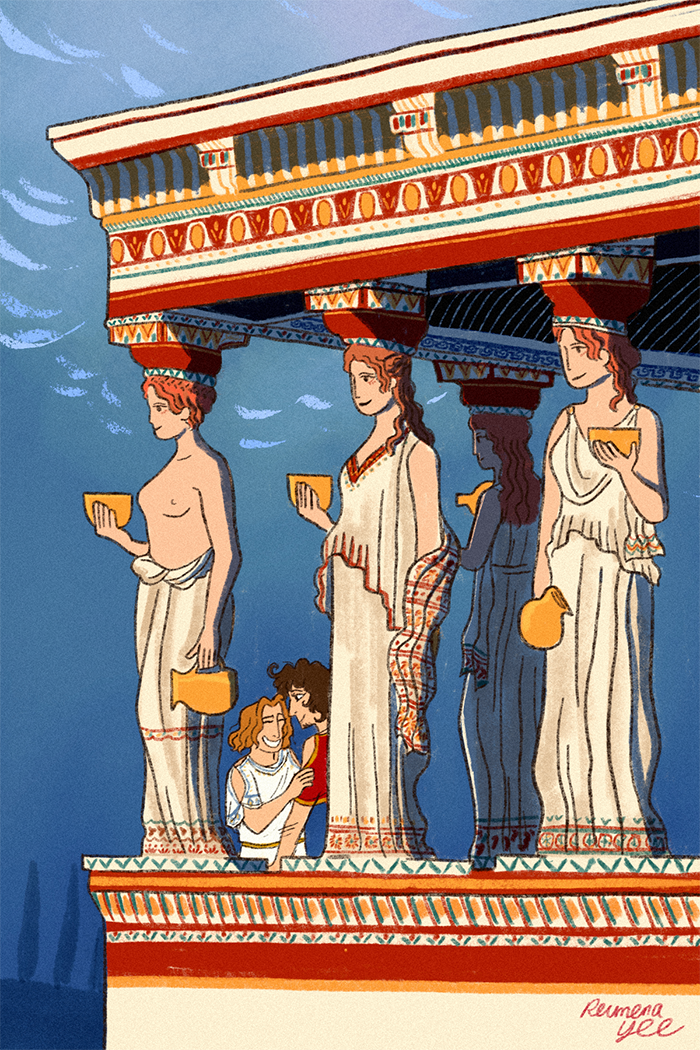 Disclaimer: I won’t deny it. Alexander is impossible to get an accurate picture of. His personhood is made out of sand and everyone brings their own bottles to shape him into. I don’t think my jar of sand is the One True Alexander, nor will it ever be. But the good news is, all the other jars aren’t that either. The nature of his (after)life is elusive. That’s what it is.

But I think I’ve gotten a hold of him. I mean this in an authorly, character-study sense. I think I’ve found something interesting.

In the beginning, I had three images of Alexander that I used as my guide: 1) the journey to the Water of Life with the Servant 2) the siege of Thebes 3) the many faces of Alexander. Later I added a fourth image, tied to Hephaestion. Those are the four ingredients for this brain stew. I let them sit. I let them bubble.

There’s also a motif that comes up in the ancient biographies and the Alexander Romances: the pursuit. The drive to do things, see things, be things.

For a long time I had this suspicion of a particular type of sadness in Alexander’s story. I didn’t know the name, but I saw the symptoms: the competitive insecurity with his father, the destructive restlessness, the death/fallout of his friends one by one through his own hands, the death of Hephaestion totally out of his hands, the breakdown of his empire after his own death.

Even in the Alexander Romance, the legendary accounts that make him heroic also double down on that sadness. Alexander, kingship is wicked. Alexander, you’ll die and never see your beloved mother/sisters again and that’s your problem. Alexander, look at this poor, deformed stillborn child – it represents your end. “From my coffin, show the world only a rag in my hand. Say that in the end I die not with the kingdom I sought, but with scraps.” Oh, it turns out that Alexander specifically is not fated for the water of life. The two angels warn him, turn back. “You may conquer the world, but the only land you physically own is the land on which your two feet stand on.” But even that land is fleeting.

Pothos. A longing for a goal forever out of reach. A goal already lost in its accomplishment. Death gets to you first.

That was the name of the sadness.

Now, I don’t intend to use pothos to absolve him. It is sad, but it is separate from the choices he made (in life and in fiction). I still have every intention to put him in the fire.

But I think I got him. My Alexander.

Pothos is not the most original thing ever. I mean, the ancient historians and the Alexander Romance writers already use it. I totally borrowed it from them. And besides, pothos is a posthumous motif that originates from a storyteller’s (well, historian’s) analysis of Alexander’s life. Objectively, it has nothing to do with Alexander’s real state of mind, whatever that may be. But man, that motif is powerful and potent and dazzling. No wonder it survives with his memory.

That’s why pothos so core to my project and why it needs to remain a thematic forefront.

Not too long ago, I had a kind of epiphany related to the philosophical attitude of some of the Romances. It started as a spark of familiarity at first. Why does the attitude seem so familiar? I realised that, of course, it’s the same philosophical attitude behind some of my favourite stories in media. And those stories happen to be East Asian. Japanese, especially.

Now, I already came into Alexander Comic with my postcolonial South East Asian lens. I grew up with a lot of Asian media that was only for the Asian gaze, with no consideration or need for Western understanding – alongside Western media, both Hollywood and artsy European and in between. So the way I view the world and the way I tell stories will reflect that media diet. Sometimes it tells me things I wouldn’t have known if I had stuck to one source of media.

The funny thing about pothos is that this concept of transcience and imperfection is a whole thing in Japanese and Chinese thought. Mono no aware, wabi sabi, kintsugi… (sorry, all Japanese terms since I’m unable to find the Chinese equivalent… due to a language barrier)

The joy and sadness of autumn. The sand between fingers. The idea that nothing lasts forever and that’s why they are beautiful. The brokenness of a thing being its history. It’s not a brokenness be proud of, or to disguise; it’s simply a brokenness that’s just is. Mundane magic.

It’s a thing in the non-English West too.

Closer to home, it’s what rindu (and sometimes, sayang) means.

I find it fascinating how someone who used to be the king of the world had not only lost his empire, but his own story. We in the modern world have almost nothing from Alexander’s time that speaks about him, to him, and from him. Much of what we know is secondhand, either some hundred years after the fact or from someone else not him. A king of the world cursed to be known by everyone and no one.

Admittedly, it’s a long dizzying way to obtain a portrait of Alexander… and who knows if this portrait is objectively in line with the real person (probably not! I mean, who knows!). But I think this exploration is part of being an Alexander Romance author.

Nizami said it himself in the first chapters of his own Sikandar Name E Bara: he was a poet overwhelmed with a thousand treasures, desperately trying to find pearls out of them to string into a beautiful narrative. Heck, forget Nizami. Arrian said it too: he had to read through fables and books (Arrian paraphrasingly calls them “trash” in contrast to Nizami’s “treasures”), desperately trying to find the best-sounding materials to make his biography of Alexander.*

*the Anabasis is not part of the Romance

At some point in the future, someone will ask me who or what my Alexander is. It won’t help that my Romance is neither a straight biography or a complete fantasy, though it includes some of both to paint his portrait. But that’s my Alexander. A mish-mash of junk and trash and history and legend. A mosaic or stained glass of foreign words with no equivalent in English.