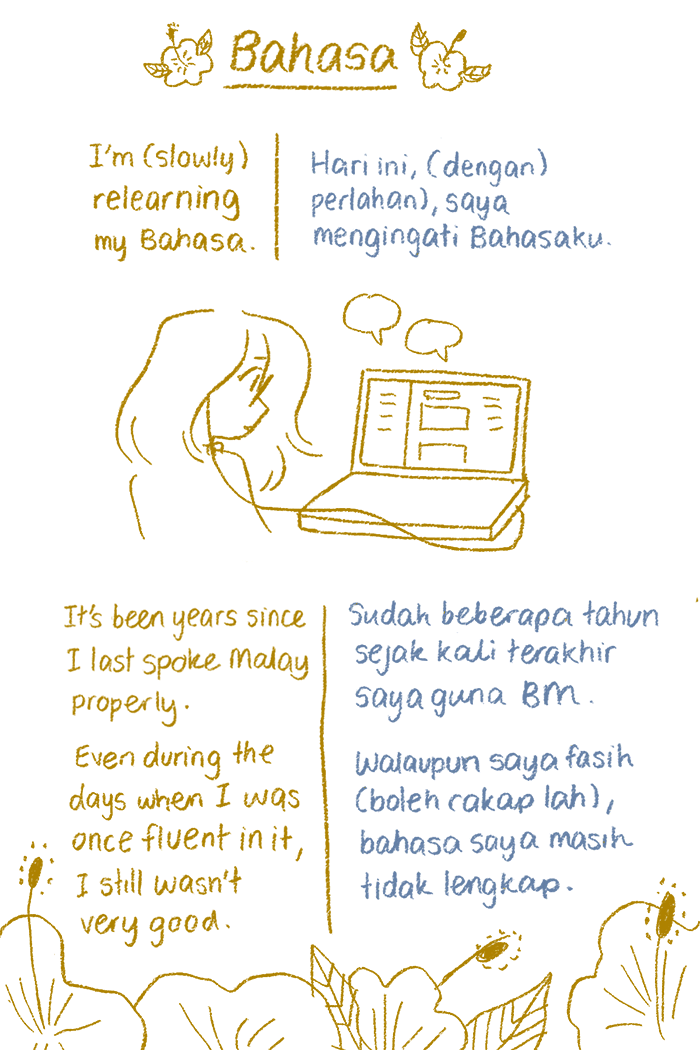 I recently published a mini-comic for Malaysia’s Independence Day (or Merdeka, as we natives call it), which can be read here. Besides the standard raw emotionality that has become a trademark of mine, it was my first attempt at code-switching and bilingualism in comics – a bilingualism that is key to the understanding of the story and emotionality of Bahasa, rather than a mere translation of one language into another.

I feel very complex things for Malay/Bahasa Melayu (or Bahasa Malaysia, according to the Authorities*). Much of these things are described in the comic: its soft beauty, its association with home, its association with alienation, its transformation into a weapon of racism and gatekeeping… All in fluent English and admittedly rusty Malay.

*we can question why particular dialects of Malay should be called Bahasa Malaysia (literally translated as ‘Malaysian Language’), when Malaysia itself is a land of a hundred dialects and languages, belonging to tens of ethnicities and indigenous tribes. Are the indigeneous people’s bahasa, which is not always Malay, considered Bahasa Malaysia? Apparently they are not. And here, we have the problem of People in Power claiming Universality by arbitrarily calling their language the National Language, when power is oftentimes not earned in justice and nationhood is an abstract concept**. But this take is too spicy, too siapa yang makan cili terasa pedas, so I will leave this issue right here on the table.

**I did allude to this problem in the final pages. And I said: let’s call every dialect and language Bahasa Malaysia. Chaos and rojak and chapalang.

***Hm, I did not think of it this way when I wrote this piece, but the true language of my comic is neither the English and Malay I used. It’s Bahasa Rojak. Or Manglish. Two sides of the same coin.

I’m done with my asterisks.

But I hope it’s clear why the comic needed to be in dual-language, read one after the other, not read as translations of each other.

The core emotionality comes from understanding both English and Malay, but losing grip with the latter. My shaky, unmelodic, sakit telinga Malay is bound by my expressive, flexible English. My English is the home I made for myself, while Malay (and Cantonese) is a house I was given that I should have felt at home in, but didn’t. Abandonment, disloyalty… that Asian filial guilt extends beyond blood to one’s mind and one’s tongue.

It was interesting to read the responses about Bahasa. I hit a chord, and it wasn’t just with us non-Malays. It was Malays too, the native speakers of this language, who were supposed to be fluent, but found unbelonging and alienation and foreignness instead.

I guess having complex, rojak, chapalang feelings about our sense of place is a Malaysian thing too.

Southeast Asianness in writing has fascinated me for a long time. Especially the way Malaysians use code-switching and multilinguism to express ourselves. Not just in mundane contexts, but in our art, and how we tell our stories. Apparently, in the spoken word scene, we are famous for this. It is true. My dear spoken word poetry queen Gwen Hay told me this. She’s where I borrowed the fascination from.

Her poem, Polyglot Problems, explores a similar thematic scape as Bahasa, but with more languages:

which is exactly how it feels to introduce
myself to my angmoh friends
who are always confused by:
“my first language is English
but yes, technically 我的母语是华语,”
“No, I’ve never been to China
but I know my family came from
the Fujian province,
I learned the dialect
after someone said
lu xi hokkien lang
jia hokkien beng
mana eh sai bey hiao kong
hokkien wei?”
“Yeah, i’m sort of mixed?”
“Yo se abuk Kristang.”
“Hometown? Kak saya kata
kalau kite kene luka
darah yg keluar tu pun
nampak cam gula melaka.”
“No, I’m not Nyonya, I just use Malay a lot.
It’s my 国语 which
doesn’t cancel out the first statement.
国语 is my bahasa kebangsaan,
母语 is my bahasa ibunda.
They should not cancel out each other.”

They always laugh when I am done
and I am almost proud to entertain.
I have spent years perfecting this act,
mask painted on thickly no matter
which language I am attempting
to juggle for them next.
Years ago I burned my tongue
attempting to create some sort of harmony
between English, 华语,
Bahasa Malaysia, Hokkien and Kristang
and now cannot stop sounding like a bad joke.
I guess I’ve succeeded because
it no longer matters which language I speak
when all the words finally taste the same:

all the words taste like I stole them off someone else.

She has some more of these brand of Malaysian poems on her website (which I highly recommend reading). The one poem that is not in there (understandably so), the one which convinced me about the unique emotional power of Malaysian code-switching, is her letter to her grandmother. It was an impactful piece. She used English to tell us the audience her personal feelings, but she interspersed the English with Hokkien? (the Chinese dialect she uses with her grandmother; Gwen, please correct me) to truly embody that actual sense of loss, because Hokkien is the only phoneline that cuts across her grandmother’s dementia. When she spoke in Hokkien, she brought her grandmother (on the other end of this metaphorical phone line) into the room with the audience. Together, both Gwen and the audience can share the silence, the gaps in time and space where her grandmother would have replied, would have been in the room… bro, that hits.

The Malaysian spoken word/poetry scene is chock full of examples.
Unfortunately my finger is not very tapped into the scene (at the moment), so I am unable to bring other examples up for discussion. However, I heard a few in person.

What I experienced is, as I understand it, the core of Malaysianness. Malaysians love to pride ourselves on our rojakness – mostly using food (Nasi Lemak! Char Kuey Teow! Roti Canai!), sometimes our multiethnic living (the stock ‘Four Major Races in Front of a Malaysian Icon, usually the flag, or the Petronas Twin Towers’ imagery comes to mind). But how do we embody this rojakness in the written word? In art? In comics, particularly?

I wrote a few experiments here and there, before Bahasa. None of them are published, or have been cut out for “accessibility”. These involve me crafting Manglish dialogue while juggling the considerations of my mainly Western, English-speaking audience. For example: dei, dei, if I write like this, weyh, can they understand me or not? Not too hard to comprehend. Sup sweyh, kacang putih, easy only. 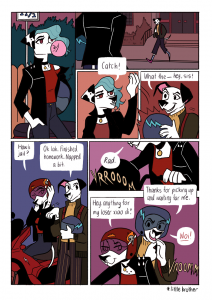 Bahasa doesn’t quite have this rojakness. It is both fully English, and fully Malay. But what makes this Malaysian regardless is that the full impact requires the understanding of both languages, and an understanding of Malaysian-only context, unbidden, undisturbed, unmarked by any other foreign, Westernised monolingual influence. And that’s where the authenticity lies. That’s how I, a Malaysian, can read this and say: inilah untuk saya. This one is for me only. 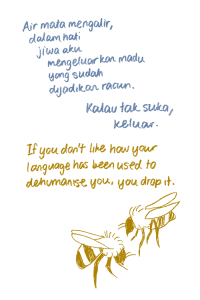 I don’t have any other projects to explore this type of writing. To push the bounds of graphic narrative; to take advantage of the pictorial, almost-universal language of images; to play with multiple languages. But one project I’ve been wanting to do for ages is an almost silent graphic novel set in Kuala Lumpur – which plays around with the opposite end of Malaysian language rojakness, that causes a specific, uniquely-Malaysian problem in local comics: the difficulty of sharing your work with people who don’t speak the language.

Case in point, my work is Anglophone, so it’s accessible only to Malaysians who understand English. What about my relatives, some of whom cannot speak English? What about the uncle in Kampung Bharu who can only speak primary school English? So in Malaysian comics there is this balkanisation that is created by language fluency.

Silence or not, I think this is indeed something I want to explore further. If not to push the craft… to reintroduce my Malaysian voice, full and proper, into my work. Afterall, rojakness has always been part of my writing, just not yet textual.