The 21st Century Vibes of Alexander 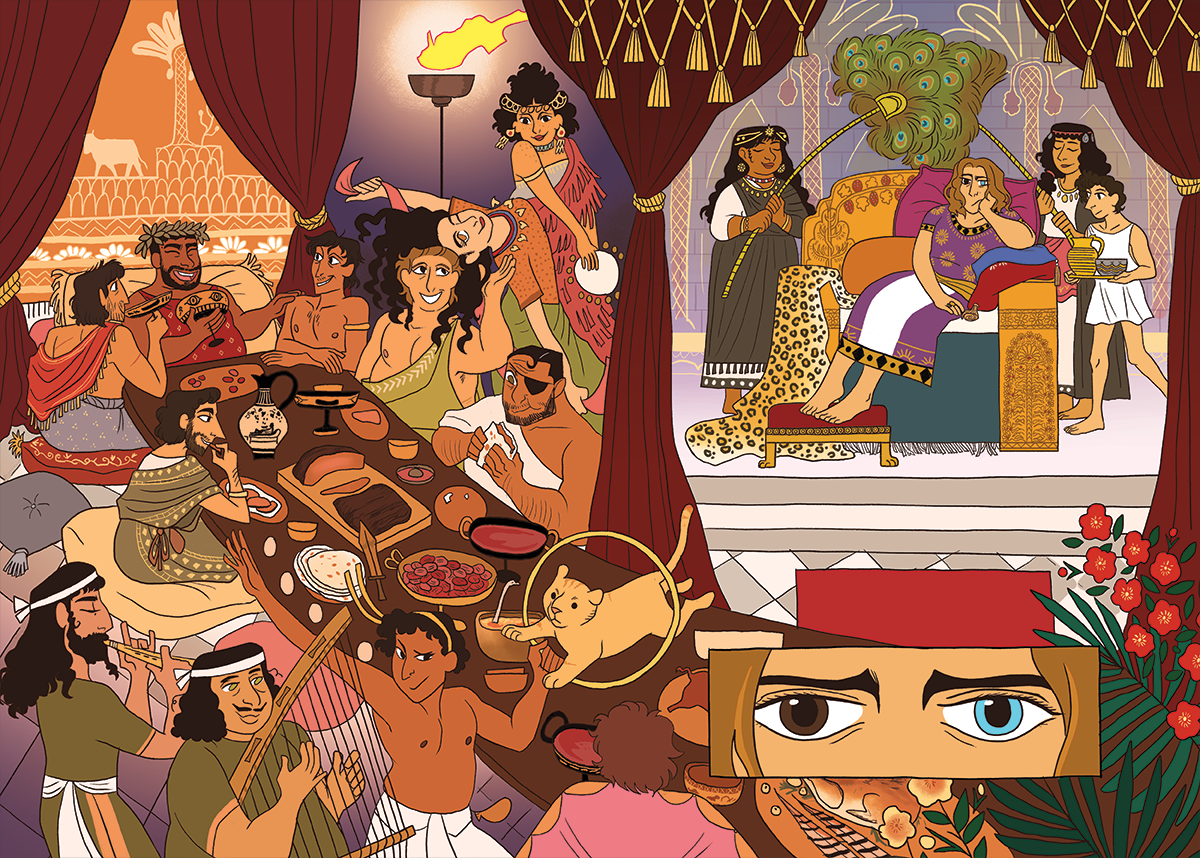 So I was pinged to this fascinating post that spoke of the strange muddying that comes from interpretating and appropriating epic literature. It was an epic by itself, starting from allegory to how people tend to project their contemporary sensibilities (or false claims) to old things to comics to the theory of Monomyth to fandoms. Here then my Alexander Comic emerges, and this is how I was pinged, because the author, Owl*, referenced that old nugget about If My Alexander Comic is Fanfic or Not.

My thoughts here are not so much a response to the content and its wider thesis (which I’d recommend; it’s very humbling to be part of such an erudite and passionate discussion, and I came away from it with a bibiliography to check out), but more on addressing an error that produced the last two paragraphs of the post. I am also urged to add some additional context and provide some insight from my side of the arts.

I came away from Mechanical Owl with a bibliography, and in good faith I shall reciprocate.

I am still adamant that my Alexander Romance is transformative fiction, not fan fiction. If it was a fan fiction of anything, it’s for the 2000 year old tradition of the Alexander Romance itself: all of its recensions and branches, and the works of visual art that are inspired by the text. But when I say it is not fan fiction, it’s because it is totally the wrong term to describe the webcomic and what I am doing with it: which is reading all of these texts and synthesising them into a new, updated Alexander Romance that not only pushes the themes already present across multiple recensions (Alexander’s thirst for conquest in relation to colonialism; physical death versus legacy; what does power mean?), but is relevant to 21st century concerns like the weakening of kingship as a power structure, climate collapse, and the very loaded imagery of walls (the Gate of Alexander, the Berlin Wall, Trump’s Wall) Every age has its own Alexander; Alexander is a mirror, etc.

Fan fiction has its own socio-political-cultural context and concepts unique to itself as a phenomenon driven by mass media and communication, and sometimes my Alexander Romance intersects with this because I myself just so happen to be born in this era and I am using the internet (the bastion of Fandom) to transmit the books. People are so hype to perform intellectual hand-waving by attaching the label of ‘fan fiction’ on transformative art that is better described by other means, old hat or radical, that they do the art a disservice by flattening it and not seeing it on its own terms. Owl’s thesis generally speaks about this attitude as its manifests through the ages (as ‘allegory’, ‘projection of beliefs’, ‘misunderstanding’ ‘philosophy’ etc), and if I read it right, leans towards being against it, or at least, cautious.

Which is why I find it odd that Owl then argues that my Alexander Romance is unconvincingly Not Fan Fiction because they claim my visual style happens to be similar to Disney, ergo I’m making a love letter visually to Disney, perhaps narratively as well, and so mayhaps, my Alexander runs the risk of Disneyfication. In relation to the other topics on that post; just as how authors have projected allegory or their religious beliefs or philosophies or whatever to old stories in their analysis or attempts to make a piece of fiction inspired by said old story, I MAY or MAY NOT be projecting the Disney way of storytelling – its values, tweeness and all – to Alexander. However this claim is divined from a personal perception of visual similarity between my art and Disney. So it’s more like, Owl projects from my style that I MAY or MAY NOT be projecting the Disney way to Alexander.

(It’s like if a biologist was told that the weasel and the ferret are the same animal because they look alike, even if it’s true they are the same species)

Or maybe the alternative read of the situation, a level less deep: the visual similiarity implies that I have not looked beyond Disney in the art direction for my Alexander Romance. That I had not done the due diligence of looking at the visual tradition of the other Romances when I chose to use my art style (equivalent to my handwriting) to present the Alexander of the 21st century; my Alexander.

I’m going to assume Owl hasn’t yet read Book 1, otherwise they would have seen that what they had advised in the last paragraph of their post is exactly what I had already done (perhaps even gone beyond) in the Prologue, Chapters 3, 4, 5 and 7 when I transformed the visual styles from European to Persian to Mughal to Ancient Greek and round again, with more visual dissonances in future books. It’s part of the entire thesis AND genesis of the 21st century Alexander Romance.

To be fair, I am not at all offended by Owl not knowing alexanderromance.com is already a thing. That ‘Is Alexander Fanfic’ post was written in 2020, one year before the comic’s debut. Plus I don’t expect anyone to read the 21st century Alexander Romance (for any reason – even if they just don’t like it) or know that it’s already finished Books 1 out of 4 — unless they are following me or the indie comics industry on Twitter.

It’s more like, in good faith, there’s a misunderstanding somewhere that led to the pointing out of the “Disney” style similarity, which led to the doubtfulness of my Alexander Romance as what I say it isn’t, which led to the questioning of the art direction as being narrow and insular, which led, finally, to the last paragraph advising that the 21st century Alexander Romance should take inspiration from the many different faces of Alexander in art history, to expand beyond the Disneyfication – not considering that the author might already be doing that since 2018.

The common trait between my style and the Disney style is the stylised simplification of shapes, which is done for efficiency and practical purposes. Let’s take for example: the horse. A horse becomes three big circles, a big wedge, a snout and four stick legs.

But this is not solely a Disney invention.

Disney animators and visual development artists take their inspiration from the same sources I do: art history. Since we’re all part of the same contemporary field of graphic, commercial art (they with animation, me with sequential art – both mediums born from cartooning and the book arts), and drawing with similar practical restrictions (simplicity, efficiency, having to draw the same drawing hundreds if not thousands of times) it’s no surprise then that the result is almost the same. It’s convergent evolution.

You can see it in animation from other countries as well, including Soviet animation.

All these examples, including mine and Mulan, are related visually but they are not created in the same time period or context or purpose.

It wouldn’t be right to call all these stylised horses Disneyfied, or even of the same derivative style. They are all simply stylised, based on the artist’s sensibilities and the traditions before.

It robs the uniqueness of the art to flatten them without understanding their provenance. Or even if one finds themselves not aware of the lineage, to at least see the art as its own thing and not wallpapering it over with the values/context/philosophy/etc of an entirely different entity. If there is visual similarity, it’s just a sign of a shared visual library.

Besides, my influence for Bucephalus is not Mulan’s horse (though they do share shape language, though yes I have watched that movie) – it’s the horses in Ancient Greek black figure pottery, the Persian style horses… and Dreamwork’s (or rather, James Baxter’s) Spirit of the Cimarron.

Horse or human, I feel like my style is not comparable to the well-constructed, high draughtsmanship of Disney and is more similar to the flat, somewhat naive, somewhat folksy, graphical ancient art. There is something more interesting to be explored in that observation, especially in relation to the modern and the ancient. How every new thing is an old thing; nothing is original; you see your grandparent’s face in your own.

Anyway, putting the misunderstanding aside, and just seeing it as Owl pointing out a comparison as an observation, it’s not that bad being compared to Disney. Disney artists and I are both 20th – 21st century entities and work in separate branches of the graphic arts that came from cartooning, the book arts and the long legacy of commercial artists making things for public/private consumption by commission (which includes illuminated manuscripts). Since my Alexander Romance is the 21st century edition, it only makes sense for it to look like something that came out of the 21st century. Afterall, the medieval manuscripts of the Romance, East or West, had more or less similar contemporaneous styles. And does that make them any less worth reading?